Here I am, send me 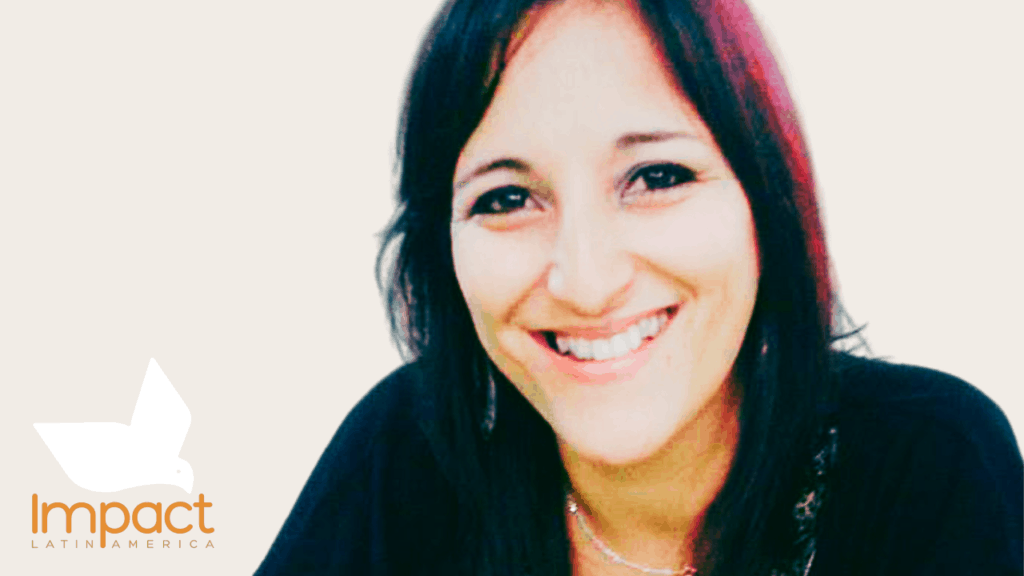 Daniela da Cunha’s story is one of healing from wounds that happened not outside but within a loving church and family. Over the years, God has restored her and, not only that, allowed her to participate in the restoration of many others.

Impact Latin America helps to fund the work of fruitful leaders like Daniela, surrendered to the Spirit of God and devoted to God’s mission of restoration for the world.

Read on to hear more of Daniela’s story.

Growing up as the children of pastoring parents, Daniela’s and her younger brother were the much adored and pampered children of the congregation. But when her parents were called to mission work in neighboring Paraguay, she was heartbroken. She said, “I suffered terribly. I was small, but I still remember sitting on my bike in the outside hall of the church crying. My desire to stay was even stronger than the thought of having to separate from my parents.”

The family arrived in Paraguay knowing no one, with no financial support, only her parent’s firm conviction that the Lord had sent them. Suddenly, Daniela had gone from being at the center of a loving community to being an outsider.

Unsurprisingly, they were very difficult years, full of scarcity. Despite circumstances, her parents remained faithful. Step by step, they won families to Christ and started churches. Meanwhile, for Daniela, “the Lord was my place of refuge and safety, I sought after Him fervently.”

As she grew older, she began to discover a passion for ministry and evangelism. At 16, she led a highly successful street theater group. As an adult, she left Paraguay to train with YWAM. For years, she participated and led missions in Uruguay, Bolivia and Chile.

Even as her passion grew, something in her heart hesitated to give herself fully to ministry. The wounds from childhood were still there.

Even so, at each stage, God was slowly healing her. Eventually, God brought her to a place of total surrender. “Things that I thought were already healed came to light to be fully restored,” she said. “After that time, I began to witness the Lord’s restorative power. People came to me to be restored as well, even strangers from other countries. When I preached, many people came to confess sins and seek help. I could fill many pages with stories of restored lives, people freed from spiritual, emotional and physical chains.”

Three years ago, Daniela met Pastor John Jairo Leal who told her about Community Church Planting (CCP). “It was perfect timing,” she said. “Our local church was very discouraged and was crying out to the Lord.” They wanted to grow, but, instead, their congregation was shrinking.

The church wasted no time. They immediately started training 23 people in the biblical principles of Community Church Planting. So far, they have reached 92 people for Christ, three neighboring cities, started 16 Houses of Peace and currently have 30 leaders in training.

These days, Daniela’s heart is fully given to missions, freed from the pain of the past and emboldened by the success of the Community Church Planting model. As proof, Daniela has followed the Lord’s call to leave her home and community behind and return to Uruguay, the place of her childhood.
She intends to practice the Community Church Planting method in Montevideo, Uruguay’s capital city with a population of 1.7 million. It will not be easy. Montevideo, like the rest of Uruguay, is one of the most secular places in Latin America but she is not alone. She will partner with Sebastian and Vanessa Carballo who lead a growing network of Houses of Peace in Durazno. Even so, Durazno is four hours from Montevideo by car, something which neither one of them owns.

In a strange turn of events, Daniela is again in the place that once deeply wounded her, leaving a loving community behind to be an outsider, ironically in the place where she once longed to stay as a child. “I feel like a foreigner here,” Daniela said, “but, here I am, eager to meet my person of peace, starting from scratch once again, with the confidence that the Lord brought me here for the purpose of seeing many lives being reached by his love, healed and restored for his glory.”

Daniela herself is a testimony to that restoration, saying, without fear, “I only seek to witness His work, my heart is willing; I have said to Him “Here am I, send me.”

As a leader whose fruitfulness and commitment has been proven over many years, we are glad to financially support Daniela in her mission to reach Montevideo and beyond. Please join us in supporting Daniela, and many leaders like her, as this multiplying movement of disciples, leaders and churches spreads across all of Latin America.