The Gospel at Gunpoint 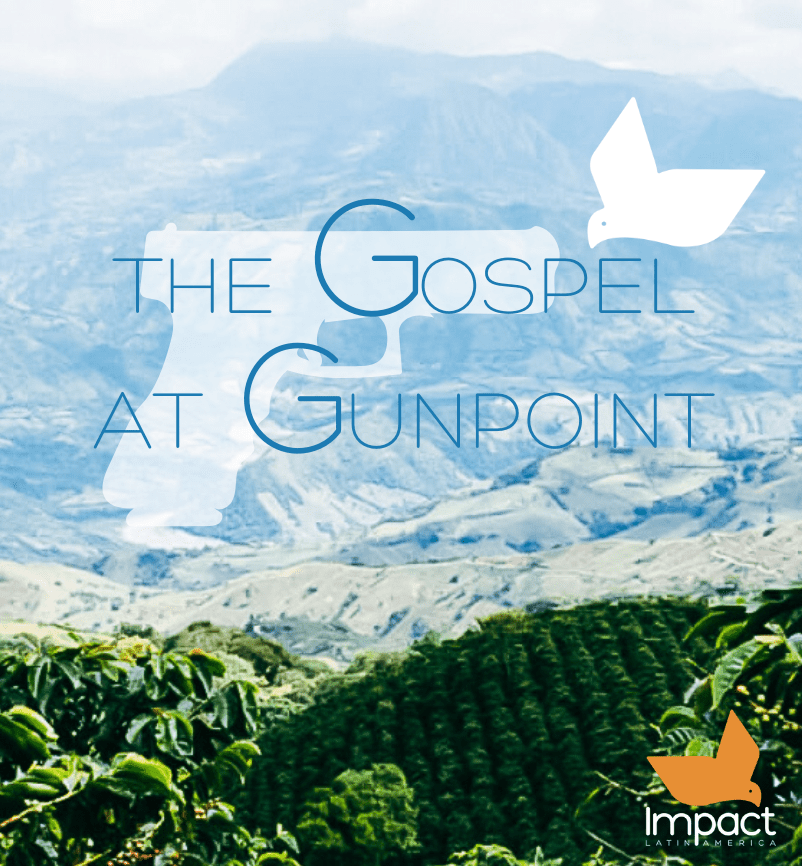 Miguel Quintero was teaching the Community Church Planting (CCP) model at the front of the room when a man burst in waving a gun and shouting for them to hand him their wallets, watches and phones.

At 96 degrees and 70 percent humidity, it had been a typical sweaty night in Valledupar, Colombia, just on the other side of the Venezuelan border. Sixteen students were gathered in the new CCP training center. Despite the climate, air conditioning is extremely rare, so they had left the windows and doors open to catch the evening breeze.

Terrified, the students slowly began to comply with his demands. Despite being terrified, Miguel heard God’s voice. “Give him your phone and tell him I love him.” Miguel cautiously approached the man, handed him his phone, and said, “God loves you.”

Immediately, the man’s eyes widened. “Are you Christians?” he asked. “Yes,” said Miguel. The man started visibly shaking, the gun quivering in his hand. He handed back Miguel’s phone. “Shut the door,” he said, and then he turned around and walked out, leaving all their valuables behind.

Five years ago, Miguel was also a Venezuelan migrant. He too struggled with the hunger and homelessness that may have led this man to desperation.

Due to Colombia’s generous border policy, nearly two million Venezuelan migrants have crossed the border, many undocumented and unable to work. Valledupar, so close to the border, has received a significant share of those migrants.

When Miguel relayed the story to John Jairo Leal (Impact Latin America CCP Coordinator) he said, “Pastor, it’s just like the bible says, God is taking care of us.”

These days, at 26, Miguel lives Pereira, the coffee growing region of Colombia. Although beautiful, many workers in the region are vulnerable to exploitation and trafficking, particularly undocumented migrants.

Miguel and his wife Yoleidys lead a network of Houses of Peace started by “Pastor Jenny.” Like most CCP networks, it is composed almost entirely of new believers.

Together they are supporting and discipling the struggling youth and children of the community and through this, God is touching the hearts of families.

Miguel has also taken on the responsibility introducing CCP to leaders and organizations in the region. Once introduced, he trains and mentors them as they grow.

In his personal life, Miguel’s mother and brother Jesús, have come to live with them while his father and brother, Diego still live in Venezuela and, just this month, Miguel and Yoleidys discovered they were pregnant with a baby boy.

Amidst his growing responsibilities, CCP has given Miguel a front row seat to learning about God.

“CCP is a way of living, practicing and witnessing what God can do,” he said, perhaps most powerfully witnessed on that hot night in Valledupar. Despite being the teacher that night, Miguel learned something critical: God takes care of us.

It’s our joy to be able to bring you this good news from Latin America. Miguel is one of scores of young leaders who are training others how disciples make disciples. He is one of the faithful and fruitful leaders you help to resource when you give to Impact Latin America.